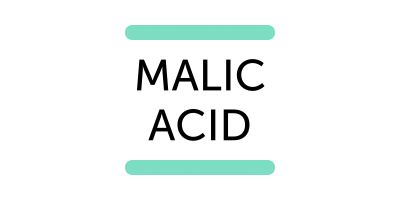 Malic acid is solely found in fruit and vegetables, most commonly in apples and pears, and has become a staple ingredient for many beauty products. A form of alpha-hydroxy acid (AHA), malic acid is popular in skin care products as well as energy supplements to boost sporting performance.

See our malic acid guide to answer your questions like what are the skin care benefits of malic acid and is malic acid safe to take during pregnancy.

What are the skin care benefits of malic acid?

If you were to scour the ingredients list of every anti-aging and wrinkle-defying product on the market, the majority of them would include malic acid. It was discovered in the early 2000s that malic acid increases collagen production and reverses the negative effects of excessive sunlight.

Is malic acid safe to take during pregnancy?

Because malic acid is naturally sourced, it's unlikely to be harmful in any circumstance. However, if you are pregnant or breastfeeding you should consult your doctor if you are unsure about taking supplements.

Who should use malic acid beauty products?

The potency and flexibility of malic acid has made it a valuable ingredient for many cosmetics companies. It is a key component for anyone hoping to hydrate their complexion and soften the effects of aging skin. This ingredient can be found in skin care products such as cleansers, night creams and serums. It's also popular with sportspeople who are looking for an extra energy boost before an event.

How often should I be using malic acid beauty products?

There have been no restrictions set on the intake of malic acid, so you are free to use it as much as you like. Of course, the extent of the ingredient's effects aren't fully known, so it's probably best to speak to your doctor before taking supplements with it in for a prolonged period of time.

What other ingredients go well with malic acid?

Considering malic acid is typically used in anti-aging products, it's no surprise that it's commonly teamed up with multiple vitamins that combine to hydrate and rejuvenate the skin. Studies have shown that it also goes well with citric acid, so fruit-based products are often rife with malic acid.

When Malic Acid products go on sale, be the first to know.