With our mouthwash guide, you can find out everything you need to know before buying or using the product including when to use mouthwash and what happens if you swallow mouthwash. If you're ready to buy or want to see our selection, visit our mouthwash page.

When to use mouthwash?

The oral care community has been debating whether to use mouthwash before or after brushing for years. The truth is, it depends on what kind of mouthwash you're using.

There are two types of mouthwash: therapeutic and cosmetic. Therapeutic mouthwash is tailored to reduce plaque, protect your gums and kill bacteria. Cosmetic mouthwash is to freshen up your teeth, however, they do not kill any bacteria or remove plaque.

The key element to whether you should use mouthwash before or after brushing is whether the mouthwash contains fluoride. If it does, then it can undo the cleansing work of toothpaste and is best used before. If it doesn't contain fluoride, then it's fine to use after brushing

What happens if you swallow mouthwash?

Swallowing mouthwash is never good, especially if it contains fluoride or ethanol. These two ingredients are often found in mouthwash and can be poisonous to the human body when consumed in large doses.

If you do happen to absentmindedly swallow mouthwash, don't panic, it's probably not going to cause too much damage. You'l likely feel dizzy or drowsy for a while, in which case you should have a lie down and drink plenty of water. If you begin to have trouble breathing, although the chances of severe illness are still low, it's time to get to the emergency room. Bring the mouthwash bottle with you if possible to show the doctors what it contains.

Many people use mouthwash purely to freshen their breath, but there's many health benefits that you should consider. Most who use mouthwash are aware there are some oral care benefits to mouthwash, but they may not what they are.

Cosmetic mouthwashes are primarily used to freshen the breath and are ideal if you're concerned about having coffee or wine breath. Therapeutic mouthwashes offer more health benefits; they contain active ingredients that remove plaque, alleviate pain in your gums and kill bacteria and gingivitis. They often contain fluoride, which strengthens your teeth and adds a whiteness to the exterior. 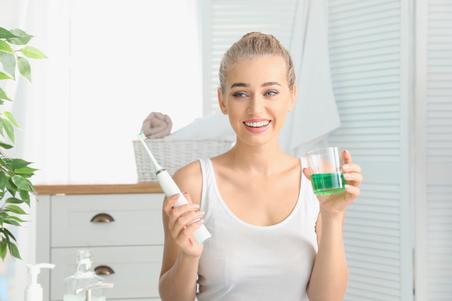 Can I use mouthwash after a tooth extraction?

Dentists recommend waiting at least a day before using mouthwash after a tooth extraction. Immediate use of mouthwash can risk dislodging the blood cot that needs time to heal.

The one-day rule is commonplace practise after a tooth extraction, however, to be on the safe side it may be best to wait another day for the blood cot to fully heal. After a couple of days, gently rinse the affected area with warm water before using mouthwash. After a few days, you can revert to your initial routine.